Although in 2008 we celebrated the centenary of the laying of the foundation stone of the new church, it was not the beginning of a new parish. The Jesuits had been approached with a view to staffing a parish and providing a school for the education of middle class boys in 1859 and they were first offered a church in the Townhead area, but this did not materialize and instead, in that same year, the fathers of the Society of Jesus took over the running of the parish of St. Joseph in North Woodside Road.

St. Joseph’s had been founded in 1850 to serve what, at that time, was an outlying area of Glasgow.  In that same year the Society of  Jesus was offered a house in Charlotte Street in the Bridgeton area of the city in which to establish the school for the education of Catholic boys. However, in the early 1860’s the Society purchased land in the Garnethill district, which, at that time, was on the western outskirts of the city and a residential area recently favoured by the wealthier classes. It included a number of Georgian and early Victorian villas.

This land consisted of the area where the church of St. Aloysius and the College playground now stand; it comprised two small houses which stood at the corner of Hill Street and Dalhousie Street and the plan was to construct the school buildings there. These plans were changed when, in 1866 the “Collegiate School’’,  in Dalhousie Street, as it was known, came on the market and the Provincial, Fr. Weld, with the help of some friends of the College purchased it. This is now the site of the main College building running from Dalhousie Street to Scott Street.

The parish of St.Aloysius began, first as a Chapel of  Ease for the parishioners of St. Joseph’s who lived around the Hill: Mass was celebrated in a large room in the College in 21 Dalhousie Street and the first  priest in charge was Fr. John G. MacLeod.

In 1868, Fr. William Kay arrived at Garnethill with instructions to found a mission at St. Aloysius which would be distinct from St. Joseph’s. He quickly set about constructing a large building on the then school play area, that area now occupied by the College Hall with the entrance in Hill Street.  This building was completed within a year at which time Fr. Kay left. This building was made of iron and glass, somewhat reminiscent of Queen Street station, and was known as “Fr. Kay’s Railway Shed’’. This building served as the parish church until the opening of the new church in Rose Street some forty years later. 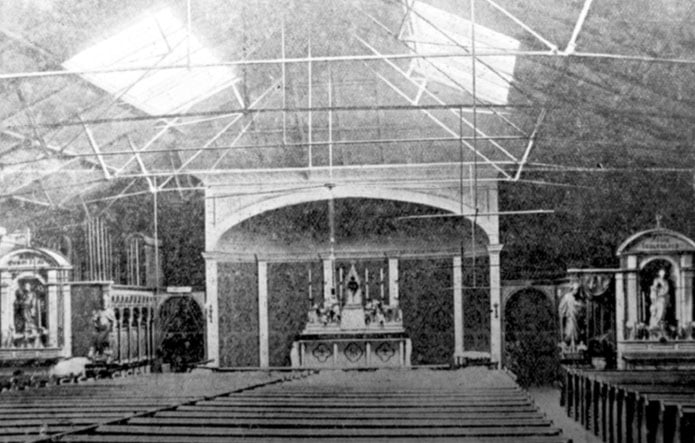 On Sunday, 4th October 1908, his Grace Archbishop Maguire of Glasgow performed the ceremony of solemnly blessing and laying the memorial-stone of St. Aloysius’ new church. The day was favoured with beautiful weather, and a large crowd was present to witness the ceremony. Aprocession consisting of St.Aloysius’ altar boys, some forty priests and his Grace the Archbishop, marched from a temporary sacristy to the platform where the blessing and laying of the stone took place. Ajar containing some current newspapers and coins, with a document relating to current church affairs, was placed in a cavity beneath the memorial stone. The Archbishop was presented with a silver trowel by Mr. C.S.Menart on behalf of the contractors, before formally laying the stone. Archbishop Maguire in his address congratulated the congregation of St. Aloysius on having at last reached the beginning of the work of erecting a new church. He claimed to be particularly interested in the work, for as a young layman he had had the pleasure of being present at the opening of the present temporary structure. The new church was unique amongst the Catholic churches of Glasgow in that it had a tower, and it is in the north east corner of the tower that the memorial-stone was placed.

The erection of the new church was completed in some eighteen months and on Quinquagesima Sunday, 6th February 1910, the solemn opening of the church of St. Aloysius Garnethill took place and the parish, which had served the Garnethill community for more than forty years, now had one of the largest and most beautiful church buildings in the city. The church is built in the Renaissance style of the seventeenth century, after the Cathedral of Namur, Belgium. The architect Menart, was responsible for many fine buildings but an architectural historian described St. Aloysius thus: “His masterpiece, though, is St Aloysius Church, Rose Street (1908-10), whose slender, golden-domed campanile rises above the church’s heavily carved Baroque façade and Byzantine dome, creating a prominent landmark on the heights of Garnethill.”

The church was still in an unfinished condition but the swift approach of a General Mission made it necessary that accommodation should be available for the large numbers who would be attending these services.

The solemnity of the function was suited to the importance of the occasion. The same Archbishop Maguire presided and the ministers of the High Mass were Canon MacLuskey, of St. John’s, Fr. Paschal O.F.M., and Fr. Antoninus C.P. The Jesuit priests present were: the Rector Fr. Crofton, Fr. Short, who had been responsible for the collecting the greater part of the money for the building, Frs. Bacon, Egger, Corrigan, Legros, Unsworth, Parry, Hanson, Bateman, McCluskey, Middleton, Annacker and Meyer.

The preacher was the distinguished convert, Fr. Robert Hugh Benson, son of the former Archbishop of Canterbury. He took as his text, “As dying, and behold we live,’’ and went on to deal with the accusations levelled against the Catholic Church that she had failed. He said that those who did not know history very well, did not realize that what the Church said today had always been said for the past nineteen hundred years.

At the opening Mass the choir, under the direction of Mr. Arthur Whittet, sang Elgar’s Ecce Sacerdos Magnus as the entry procession made their way in and during the celebration of Mass performed Gounod’s Messe Chorale, with Elgar’s Ave Maria as an Offertory Motet.

The laying of the foundation stone, 4th October 1908 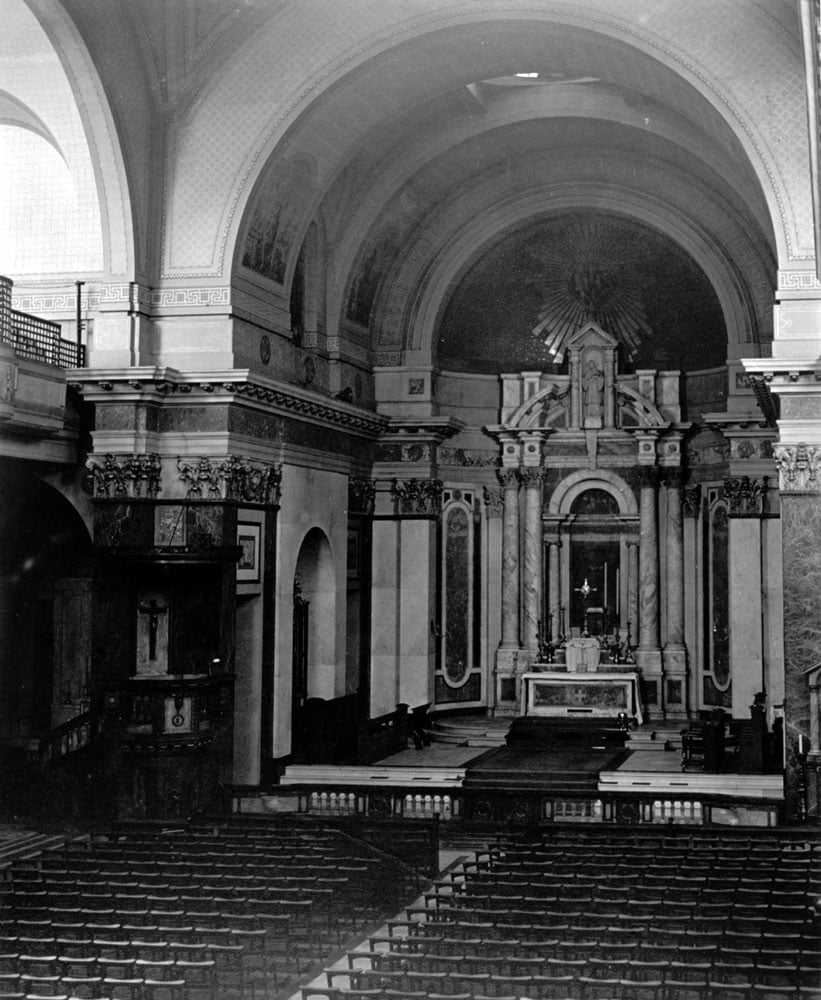 Scroll to Top
Like most websites we use cookies on this site to ensure you get the most from your visit. Please select 'Yes' if you are happy to proceed...YesNoPrivacy policy